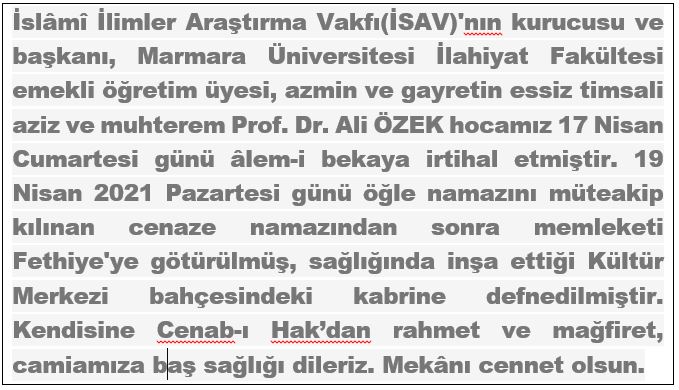 An International Symposium On “ Religious Institutions and Education In The Process of European Union” made on 17 thru 19 Nov 2006.

The Foundation for Research In Islamic Sciences was set up in 1970.  Now a thirty six year old foundation.

ISAV was set up to carry out scientific  research or to have the competent people make researches, or to bring up scholars to this end.

So far, our foundation held up eleven International Symposiums and all the papers and discussions presented were individually compiled in a book. This is the twelfth symposium of that serial. On top of that, another thirtynine domestic nature symposiums were held and all the subjects discussed were also published in a book.  A total of sixty-four books were printed by ISAV so far which is enongh to make up an ISAV library.

Now I want to touch on some subjects in relation with the topics of our meeting.

The theme of “ Religious Institutions and education in the process of E.U” is a rather important subject. In fact, the factor that guides communities during the course of human history and also in our time has always  been a universal viewpoint which religious sense and faith formed up. No matter who says and what says, the thing that guides a man is his faith, and also his thought which is formed up depending on that faith. That’s why the place and effect of the religion in one’s life is rather clear. From the moment of commencement of the Age of Reason, though ıt seems diminished, in reality, the role of the religion has ıncreased. It has only changed its form. If we have a look to the missionary activities of all religions which has been conducted in the east and west of the world during  the 20 th century, we see that the concern toward religion has not been diminished, in contrary, it has increased. But only in recently in the religious concept, some important changes occured.

While religious aspect of the belief remains static, some relaxations and alterations have occured in actions and applications.

Again, in the 20 th century, in modern communities particularly, the religious institutions and their teachings have made great considerable strides.  For instance, about the worships and the rituals of Muslims during the pilgrimage, lots of news items could be reported through different mass media of the world. In the same way, the pope’s election made at Vatican, pulls not only the catholic world’s attention but also the whole world’s agenda.

In the meanwhile, we see that man’s behavioural conduct which is previously considered to be contrary to both moral and religious values, now began to be seen permissible. But when we look at the religious aspect of the issue, we see that there was not much changes.

By means of resources that technological progress bestowed, in the developed communites particularly, we witness that the activities of the religious institutions have become widespread gradually.

Religious activities are not performed only within the borders of the  temples anymore. They have an access in the socio-economic and cultural aspects of our daily life. It is now a reality that educational activities are determined to be the main field of occupaton of all the religions.

Just as each country’s having their own organised and widespread institutions that give religious education, there are also international religious institutions that give organized education. For instance, catholic world has a widespread educational network in organised education. There are almost 200 thousand schools in the world affiliated to the International Catholic Education Office which has a center located at Brussel of Belgium. Almost two million teacher give education and training to 40 million students at these schools. Catholic world has also an İnternational Catholic Universities Federation at Paris and out of 950 catholic universities in total, 200 located at different countries of the world are active members of this organization. Approximately 4 million students who are attending to those universities are having an education in different branches such as theology, law, literature, medicine and engineering.

When said “Catholic and protestant schools in Europe”, we should not understand educational institutions which have no religious identity other than their names. Because, when their missions and visions are taken into account, those internationaly acting educational institutions, thanks to the education they gave, are seen to have left ajar some important doors against the religion they represented. For instance, the students attending to those catholic schools are not becoming christians immediately. But when continued attending to those schools, catholic church seems to have paved the way firmly in the minds of the students.

In the member countries of EU in which Turkey wishes to join in near future, for widespread religious education a special emphasis is given much as for the organized religious educational institutions. Similar to the Quranic courses in the Muslim World, Biblical Courses have been opening in the European countries which speak to many people regardless of their age.

In the past, when religious educatian was given only at mosques, churches, schools or similar institutions, today this education gained an access into the houses through mass media and internet particulary. That means we have the chances to attain all kinds of information we need instantly.

In Europe, France takes the lead among countries where too much arguement are made for the religious institutions and other educational institutions affiliated to them. In 1905, the state and the church seperated from each other completely. But France, with a special law issued in 1959 particularly, all  the schools affiliated to the catholic church accepted the same curriculum adopted by the French Ministry of Education for the public schools.  These schools, without making any discrimination, have opened their doors for each members of any religion. Particularly, out of one million students living in that country, almost 250 thousand are having an education at these schools. It is said that, in country-wide, nearly 250 different associations and locations based on religion have been contributing voluntarily to the educational activities of these catholic schools.

Here I want to pull your attention on a thing: Religious education and teaching is very important for a man. How can we, as Turkey, deal with that problem once we enter E.U.? So, at this meeting, participants coming from within country or out of country are going to try to throw a light on that issue and make proper advices accordingly.

While giving an end to my speech , I beseech from God, our meeting be successful and also be an instrument for our well-being